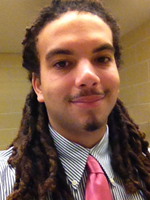 Congratulations to junior Jonathan Goodell (Geography, Cartography/GIS ’15) for winning a 2013 McNair Fellowship. The McNair Post-Baccalaureate Achievement Program at the UW-Madison awards 25 fellowships annually to high-achieving low-income, minority, or first generation college students to encourage enrollment in graduate studies. The program is designed to prepare undergraduate students for doctoral studies through training seminars, involvement in faculty-mentored research, and other scholarly activities.

Developing research interests
Goodell remembers an “obsession” with geography from a very early age. The preoccupation with memorizing state capitals turned into a deeper interest in geography and political science at his kitchen table one morning while digesting the Washington Post’s map and analysis of the Republican primary in New Hampshire in 2004; he was captivated by the differences in candidate support based on the state’s geography.

As he became older, his interest in geography became meshed with his identity. “As a person of Black, White and Native American heritage, I became increasingly interested in race over space,” he says.  “I started spending my free time using the New York Times’ online “Electoral Explorer” looking up demographic information and determining how demographics affected political campaigns. Due to my interest in geography, black identity and international relations, I became curious about the African Diaspora outside of the United States. To me, the question “what does it means to be black outside of the United States?” is something that fascinates me. This fascination has led to my plans to conduct research on how immigrant communities (particularly African ones) have been affected by the Euro Zone crisis when I study abroad this coming spring in Madrid, Spain.”

Goodell is looking forward to McNair Scholars Program support to help him transition from an undergraduate with many interests to an experienced scholar with a clearly defined career path. While not exactly sure what he will do after college, he knows that a graduate degree will be necessary for his long-term career success.

Jonathan is currently a Powers-Knapp Scholar who is serving two years as his class’ co-chair and is a member of the undergraduate Geography Club. He hails from the Washington D.C. metropolitan area.