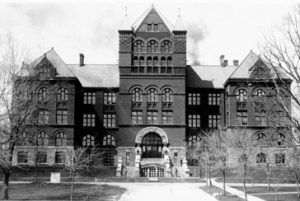 Replacing a sandstone-faced, wooden structure that burned on December 1, 1884, Science Hall was completed in December, 1887, and was first occupied by University personnel in January, 1888. It was one of the first, if not the very first, buildings in the country to be constructed of all masonry and metal materials (wood was used only in window and door frames and for some floors), and may be the only one still extant. Massive iron and steel beams provide the framework for the building’s central section and its interior floors. In spite of the importance of this innovative use of then-modern building materials for structural support, the distinctive look of Science Hall depends more upon its masonry, “its imaginative use of stone, brick, and tile.”

Described as representing “Richardson Romanesque” style (in the tradition of Henry Hobson Richardson), Science Hall presents itself with dignity, strength, and boldness. Its dark red brick walls rise from a stately foundation of lighter-colored Berlin (Wisconsin) rhyolite (a volcanic rock). Its massive, rectangular central tower is augmented by lesser corner towers, beside which extend the building’s two imposing wings. Covering all is a steeply-pitched, and thus highly-visible, roof with extruding dormers. Round arches, “perhaps the most consistent identifying element” of the style, accent outer doors and windows (especially on the first, third, and fifth floors) and grace the interior hallways. The large arch at the main entrance is framed by imposing blocks of unfinished rhyolite, “to contrast with the squat, polished column on either side.” Decorative use of protruding and recessed brick provides detail on walls, turrets, and arches.

The grandness of the building’s physical character mirrors the prominence of the academic traditions that it has housed. Originally Science Hall was home for the sciences generally–geology, anatomy, geography, physiology, zoology, botany, physics, engineering, meteorology, and agriculture. Former university presidents worked here during their scholarly years, including Charles R. Van Hise (geologist), Thomas C. Chamberlin (geologist), and Edward A. Birge (botanist), as well as former Chancellor David Ward (geographer). Science Hall today is dedicated mostly to the Department of Geography, including the Arthur H. Robinson Map Library, the Geography Library, and the Cartography Laboratory, as well as home for the State Cartographer’s Office and the Gaylord Nelson Institute for Environmental Studies. 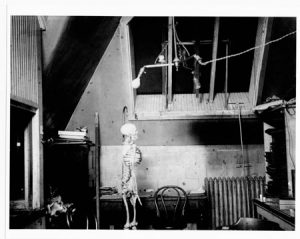 Both an architectural and educational edifice, Science Hall also is tied to the mysterious. Much of this part of its reputation results from its castle-like appearance and its link to the campus system of underground utility tunnels, but the former presence of the Department of Anatomy contributes greatly to the building’s mystique. Over the last twenty years, wandering graduate students have exhumed from dusty and forgotten corners of the attics a set of leg bones of a “tall man” and an embalmed human foot. Samuel Rogers set his mystery novel Don’t Look Behind You in Science Hall, as did authors for First Comics’ The Phantom of Bascom Hill. Bats regularly fly its vaulted hallways…

Think of this richness as you explore Science Hall—a National Historic Landmark*—look at the plaque just above the sidewalk on the street. Admire the building’s towered grandeur from down Langdon Street. Walk toward the structure, and notice the magnificence of style–the turrets and dormers, the arches and raised brick, the imposing roof. As you climb toward the arched entrance, look for the neat blocks of rhyolite framing the basement, the massive unfinished blocks bordering the stairs, and the polished columns beside the wooden doors. Enter the building, and read, before passing through the inner doors, the plaque commemorating the study of geology in Science Hall.

Continue up to the first floor landing, and take a few minutes to look around: Turn and watch the light coming through the large stained glass window over the doorway; note the plaque celebrating fifty years of geographical inquiry in the building; delight in the scrollwork of leaves and flowers on the pillars beside the elevator; count the arches that adorn the halls and doorways. Climb the black-painted iron stairway. As you do, notice the iron lattice that encloses the elevator and the historic relief maps of central Utah and the state of California along the walls. Once you reach the second floor landing, turn around to see the underside of the metal stairs, with protruding rivets, and the massive steel beam supporting the landing between the second and third floors. 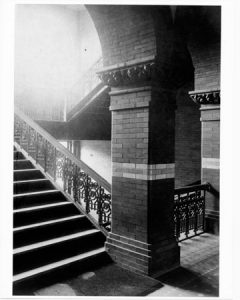 Continue up, past still more relief maps, to the third floor, and wander down the hall to the right, toward the State Cartographer’s Office, passing beneath the modified hallway arch. (At the end of the hall, you will notice the Department’s GIS lab.) From a window looking out toward the back of the building, you will see, at the rear corner, one of the two circular turrets that rise up from the ground level to the fourth floor, and two of the sixteen chimneys that once were part of the building’s heating system. You may also see, close up, some of the embellishment of brick on the exterior walls.

Then, stroll back the way you came, through the hallway arch and down the stairs, and think of the esteemed scholars who, for more than a century, have walked these halls, and the thousands, even tens of thousands, of students who have sought and found here, in formal lectures and casual discussions, knowledge and wisdom. Imagine the mystery of the place, the magnificence of story and myth, and be thankful that we have still standing this great building, Science Hall.

* Science Hall was listed with the National Register of Historic Places in 1993 as building number 93001616. It is part of the Bascom Hill Historic District, designated in 1974, which is bounded by Observatory Dr., University Ave., and N. Park, Langdon, and State Streets.