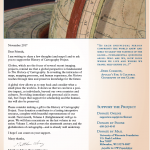 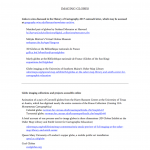 (Download a print version of the “Imaging Globes” links and information below.)

Links to sites discussed in our most recent outreach letter (download a print version of the 2017 letter).

Matched pair of globes by Gerhard Mercator at Harvard
hcl.harvard.edu/collections/digital_collections/mercator.cfm

Animation of a pair of Coronelli globes from the Harry Ransom Center at the University of Texas at Austin, which has digitized nearly the entire contents of the Kraus Collection (Catalog 124: Monumenta Cartographica)

Maps featured in the outreach letter

Looking at old globes from the right angle can make the Earth look like Saturn, as shown by the detail of this 1787 globe on the front of History of Cartography Project’s 2017 outreach letter.

There is an entire genre of nineteenth-century globes that unfolded or expanded like umbrellas to be displayed with a flourish to capture the attention of children and to be stored safely. The genre is discussed by Volume Six editor Mark Monmonier Volume Six editor Mark Monmonier in his most recent book, Patents and Cartographic Inventions (Cham: Palgrave Macmillan, 2017).

Willem Jansz. Blaeu pioneered the commercial market for globes in Amsterdam, beginning in 1599, producing pairs of terrestrial and celestial globes that together modeled the entire cosmos. He mostly produced smaller, cheaper globes, from two to nine inches in diameter (this one is six inches), but also two larger sets at 13.5 and 26 inches.

The British map publisher, James Wyld, proposed the construction of his great géorama as both an extension of the great Crystal Palace Exhibition that opened in 1851 and as a means to redeem the run-down and unsavory Leicester Square. In the notice accompanying the image, Wyld was reported to have “recollect[ed] that only a limited part of the sphere can meet the eye at once,” and so had thought that “by figuring the earth’s surface on the interior instead of the exterior of his globe, the observer would be enabled to embrace the distribution of land and water, with the physical features of the Globe, at one view.” His “Model of the Earth” was constructed so that each degree of longitude around the equator was six inches long, giving a diameter of about sixty feet. The great globe drew large crowds, but Wyld tore it down at the end of his lease in 1862.