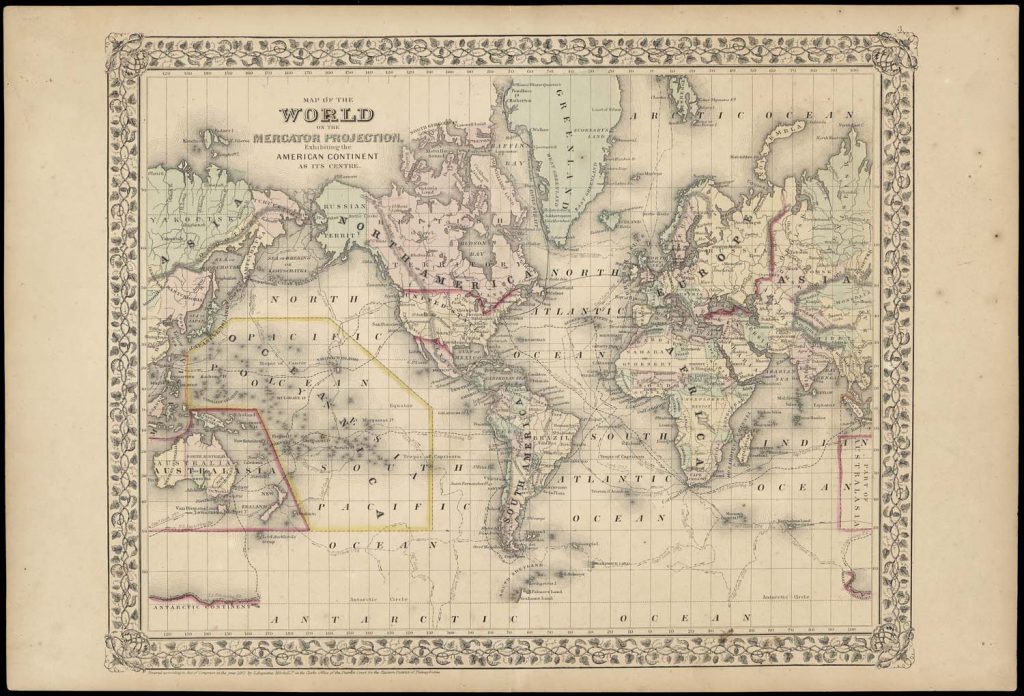 Map of the World on the Mercator Projection exhibiting the American Continent as its Centre. Creator: Mitchell, S. Augustus. Philadelphia, 1867. 33 x 43. Courtesy of the Osher Map Library.

The nineteenth century was the era of cartography. Mapmaking was so rapidly institutionalized, specialized, and professionalized that a neologism had been coined for it by the 1820s: “cartography.” From the 1850s, the institutions and practices of this formalized cartography became increasingly international, intersecting across Europe and the Atlantic and being introduced to traditional Asian societies. With Enlightenment debates over observation and measurement rendered moot by ever more efficacious instrumentation and associated statistical modeling, mapping practices became more uniform, and the topographic survey plan, the exemplar of technological certitude, became the prototypical map. Governments and administrations of Europe’s reorganized and industrializing states committed significant resources to establish permanent mapping organizations in order to sustain increasingly intense territorial control both at home and in the overseas empires. The intersections with scientific inquiry were found in new governmental programs to gather data about both society and environment. Map consumption continued to expand as economic growth, the flourishing of national fervor, increased travel and tourism, mass education with prescribed curricula, introduction of cheaper printing techniques, and the wholesale creation of new urban and interurban infrastructures all led to widespread cartographic literacy, map use, the growth of corporate mapmakers.

The industrialized spirit of the nineteenth century extended to the aesthetics of map design, in part determined by the new print technologies and the eventual introduction of color printing, often exhibiting lush Romantic and Victorian tastes and experimenting with a profusion of typefaces developed by the new foundries.

Volumes Four, Five, and Six are structured as large, multi-level, interpretive encyclopedias. They are similar in page size and general appearance to the first three volumes of the History, with the same density of illustrations but with full color reproductions.

About the Editor
Roger J. P. Kain is a graduate and fellow of University College London and was Montefiore Professor of Geography (1991–2010) and Deputy Vice-Chancellor (2002–10) at the University of Exeter. He was Dean and Chief Executive of the School of Advanced Study, University of London from 2010 to 2017 and is now Professor of Humanities. He was elected a Fellow of the British Academy in 1990 and appointed CBE in 2005. Professor Kain’s personal research in the history of larger-scale modern mapping in the United Kingdom, and in property mapping generally, has entailed seven externally-funded research projects and has produced a number of award-winning books.

Coeditors
Peter Collier, formerly with Portsmouth University, United Kingdom, is an expert in military and topographical mapping in the nineteenth and twentieth century. He is active in the International Cartographic Association Commission on the History of Cartography. Collier was also a major contributor to Volume 6.

Imre Josef Demhardt, a native of Germany, is fluent in German, Dutch, and English and is a specialist in the histories of cartography and exploration in the nineteenth century. Previously at the University of Darmstadt, he joined the University of Texas at Arlington in 2008 as Virginia and Jenkins Garrett Chair in the History of Cartography and Greater Southwestern Studies. He chairs the International Cartographic Association’s Commission on the History of Cartography (2015–date).

Carla Lois, a native of Argentina, is fluent in Spanish, French, and English and has a good reading knowledge of Portuguese and Italian. She is one of the leading promoters of the study of map history in Latin America, via the annual Simpósio Ibero-Americano de Historía da Cartografia, and was a member of the organizing group for the new International Society for the History of the Map. Dr. Lois’s own research currently addresses the modern mapping of Argentina and the visual epistemology of cartography. She teaches at the Universidad de Buenos Aires.

Associate Editors
Peter Barber was formerly Head of Maps at the British Library. He is an expert on many aspects of map history, including the personal use of maps by British monarchs. Barber has contributed to Volumes 3, 4, and 5.

Peter Nekola has served as assistant director of the Hermon Dunlap Smith Center for the History of Cartography at the Newberry Library, Chicago, and has taught at Luther College, Pratt Institute, and a number of other universities in the United States. He is broadly trained in philosophy and history, more specifically in the history and philosophy of geographical science in the modern era, and has worked at the junctures of several related philosophical and historical subfields. Dr. Nekola is also a contributor to Volume 5.